Causes of a blocked dishwasher

Easy way to unblock a dishwasher with HG 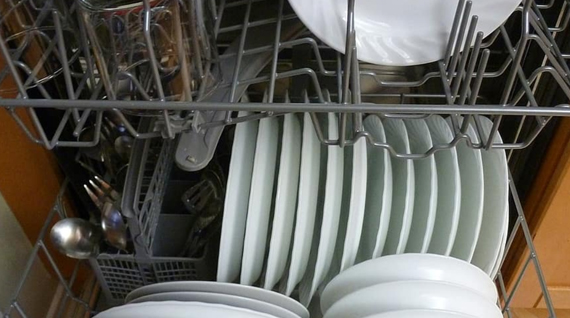 HG kitchen drain unblocker is intended specifically for blockages in the kitchen and deals with grease and bits of food. It can also be used to unblock the dishwasher drain. Unblocking the dishwasher was never this easy.

This is how you use HG kitchen drain unblocker to unclog the dishwasher:

How to unclog a dishwasher with other products

1. Unblock a dishwasher with bicarb

You can dissolve food and grease residues with bicarbonate soda. Sprinkle the soda in the blocked drain of the dishwasher. Pour a litre of hot boiling water and leave the bicarb to work for 30 minutes. Rinse with hot water and check that the dishwasher drains again.

2. Unclog a dishwasher drain with baking soda and vinegar

When it is mainly scale that causes your dishwasher to clog up, you can also use vinegar with a cup of baking soda. Add soda to the dishwasher and add a bottle of cleaning vinegar too. This will start to foam. Leave this to work for at least 1 hour and rinse with a litre of boiling water.

If you have a good tip for dealing with blocked dishwashers, please let us know!

Frequently Asked Questions about how to unblock a dishwasher

What blocks up a dishwasher?

The dishwasher becomes blocked by scale, food and soap residues. You can prevent this by cleaning the dishwasher regularly.

How can I unblock the dishwasher?

How can I unblock the dishwasher manually?

Other products don't work? Check manually why the dishwasher is blocked:

Which HG product do I use for a blocked dishwasher?

HG kitchen drain unblocker is intended specifically for blockages in the kitchen and deals with grease and bits of food and can also be used for the dishwasher.