Blocked drains are an inconvenient and annoying problem. Whether they occur in your bathroom or kitchen, they can get in the way of your daily routine and even damage your home if the drain overflows. You can see our tips on how to prevent a blocked drain, find out how to unblock a sink drain and more.

HG has various solutions for blocked drains. HG drain and plug unblocker is a versatile, ready-to-use product for your toilet, shower or sink. It effectively unblocks your drain and does not affect plastic pipes.

For your sink, HG duo unblocker is suitable for the most stubborn blockages in your kitchen sink or wash basin. It can also be used to unblock shower drains.

A blocked sink in the kitchen is often caused by grease and food remains. HG kitchen drain and plug unblocker contains natural micro-organisms, which break down blockages caused by food and grease.

Blocked sink or blockage in the bathroom? Many blockages in the bathroom are caused by hair, as well as a build up of soap, skin grease and even toothpaste. HG drain and plug hair unblocker is an ideal product for your bathrooms sink and shower.

3 tips to prevent a blocked drain

The following tips will help prevent blocked drains in the kitchen, toilet and bathroom.

1. Avoid putting food down the sink
When cleaning pots and pans, you should scrape any food remnants into the bin before rinsing. You can also purchase a filter which fits above the plughole. This helps prevent food from going down the drain. You should also avoid pouring cooking oil down the drain, as this can solidify and stop water from passing through. Try pouring it into an empty bottle then disposing of it.

2. Avoid putting things down the toilet
The only things you should put down your toilet are toilet paper and tissues, as these dissolve and break down to avoid causing blockages. You should avoid putting too much down at once though. Also avoid flushing kitchen roll, feminine pads, tampons, nappies and dental floss. These will not dissolve and will likely cause your toilet to block.

3. Clean shower drains and sinks
Keeping on top of cleaning your shower and sinks can help to avoid blockages. Loose hair, as well as buildups of hygiene products and skin grease can block your shower or sink. Try and regularly remove hair from the drain and clean your sink and shower often.

How to clear a blocked drain?

No matter how hard you try, sometimes you can’t avoid your drain getting blocked. As well as using HG, there are some home remedies for unblocking your drains.

3 household remedies for unblocking a drain

Various websites and blogs mention several household remedies for dealing with blocked drains. However, these methods do not guarantee success.

1. Soda and hot water
Take a handful of soda and throw it in the blocked drain. Then pour hot water in the blocked sink or drain. If this doesn’t work, you can also add vinegar. After trying this solution, you should pour at least 1 litre of boiling water down your drain to clear.

2. Cola
As well as being a refreshing beverage and effective at removing rust, cola can also help unblock your drain. Pour a bottle down, then wait 15-30 minutes and pour a litre of boiling water into the blocked sink. Again, this may not be so effective with serious blockages. 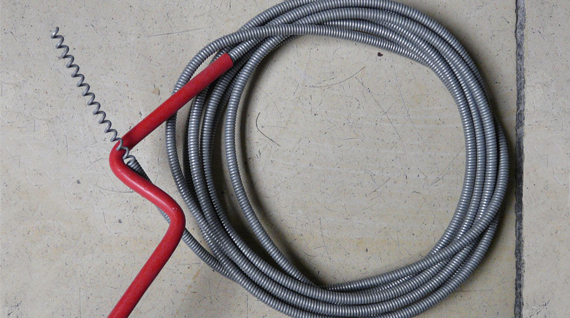 3. A plumber's snake
This tool can be used when the clog is deeper down in the pipes. The flexible steel cable bends to fit  through the pipes. Push the plumber’s snake as far down the drain as you can and then turn the hand spinner. The turning motion dislodges the blockage and unblocks the drain.

If you’ve tried these methods and they weren’t so effective, you can try one of the many solutions from HG, which are developed especially for blocked drains.

How to unblock a kitchen drain
As mentioned, food remains in the drainpipes are the main cause of a blocked sink in the kitchen, as well as grease and oil from pots and pans. You can see more about how to unblock a sink.

Blocked bathroom sink
Soap remains and hair are the main culprits when it comes to blocking the bathroom sink. With this buildup, over time the drain becomes narrower until it is completely blocked.

Blocked toilet
Toilet paper and tissues are fine going down the toilet, unless it’s too much at one time. As mentioned, you should avoid flushing other items like tampons and dental floss down.

Other causes of a blocked toilet included a buildup of limescale. An overflowing sceptic tank or a blocked drain near the tank can also cause your toilet to block. 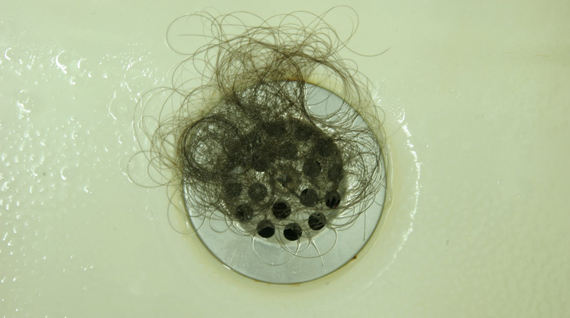 Do you have a good tip for unblocking a drain? Let us know!

How do you unblock an outside drain?

How can I tell if my drain is blocked?

The main sign of a blocked drain is when your water goes down slowly, or doesn’t go down at all. Other telling signs include a smelly drain and gurgling sounds when the water goes down the plug.

Can bleach unblock a drain?

Although bleach is very acidic and an effective cleaning remedy, it has no use when it comes to unblocking a blocked drain, as it cannot breakdown deposits of oil, food, hair and more. Pouring bleach down your blocked drain may block it even more.

How to unclog a sink: Tips on how to unblock a bathroom sink