Blocked sink: Learn how to unblock a kitchen sink

What causes a blocked sink?

The main cause of a blocked kitchen sink is remnants of food and build-ups of grease. Residue from soap and other cleaning products can also cause blockages over time, or make blockages even worse. 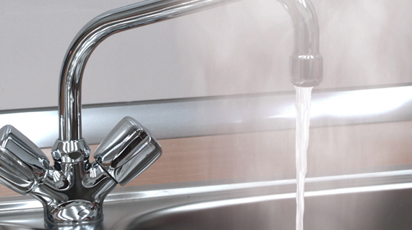 Usually, your kitchen sink becoming blocked is a long process. Gradually, the build-up of food, grease and cleaning products makes the drain narrower, until it becomes blocked completely.

Although less common, a drain can become blocked due to improper installation and old drainage pipes. Cast iron pipes for example,

can become blocked due to a buildup of rust, dirt, grime and waste. If you think this is the cause of the blocked kitchen sink, it could be worth having them professionally cleaned or replaced with plastic pipes.

A sink can easily get blocked with daily use. The tips below will help you prevent a blocked kitchen sink.

1. Avoid leaving food in the kitchen 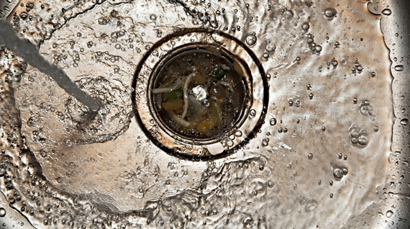 Before you put your dishes in the kitchen sink, make sure you empty all of the leftovers into the bin. You can then rinse the plate clean or place it into the dishwasher. Filters for the plughole are also useful at preventing food from getting down the drain.

Hot water can remove some grime and build-ups of grease, without damaging your pipes. You should always wash your dishes using hot water, as this is more hygienic as hot water removes more germs than cold water. It also helps prevent build-ups of grease.

3. Use soda regularly to rinse the drain

Soda can also help to remove build-ups of grime.

4. Never throw frying oil or gravy in the sink

Although tempting, you should avoid throwing cooking oil down your kitchen sink. Once this cools, it solidifies. It can then cause a build-up of grease and cause a blockage. Gravy also solidifies once it cools. You should instead throw these in the bin. However, make sure you use high-quality binbags to avoid leaking.

HG is the solution to unblock your sink drain

If your kitchen sink is blocked past the U-bend, HG kitchen drain and plug unblocker contains natural microorganisms, which can eat through the blockage. The natural enzymes and microorganisms mean it is completely biodegradable and absolutely safe for all types of drains and septic tanks.

For extremely stubborn blocks, we recommend HG duo unblocker. To unblock a blocked drain, toilet or shower drain, you should try HG drain and plug unblocker.

Various websites and blogs have household tips for blocked sinks. Below are 2 of these household remedies.

You can try unblocking a blocked sink by pouring coffee grounds from a used coffee filter or espresso machine down the sink. Coffee grounds can work as an abrasive and clean the drain.

To unblock your sink with baking soda, put some baking soda in the sink and add a bit of vinegar, then rinse the drain with hot water.

If your sink is still blocked after trying these tips, you should try using HG kitchen drain and plug unblocker.

Do you have a good tip on how to unblock a sink? Let us know! You can also see our guide on how to unclog a bathroom sink.

Frequently asked questions on how to unblock a kitchen sink

Can I use Bleach to unclog a drain?

Although bleach is a powerful cleaning product, it cannot breakdown a build-up of grease and food remnants. It may clean your pipes, however won’t unblock them. It could also react with other chemicals and make the blockage worse.

What is the best way to unblock a kitchen sink?

The best way to unblock a kitchen sink is to use a specially formulated product like HG kitchen drain and plug unblocker. This can effectively remove food remnants, as well as buildups of grease, oil and cleaning products without damaging your pipes.

Can I use boiling water to unblock a drain?

Boiling water can help to unblock your drain. It can break down build-ups of oil and grease, however it is not so effective at getting rid of food remnants. A specially formulated drain unblocker like HG can get rid of grease, oil and food remnants.

How do you unblock a kitchen sink without a plunger?

There are many ways you can unblock a kitchen sink without using a plunger. You can try a DIY solution like baking soda & vinegar, or even used grounds. However, specially formulated drain unblockers like HG are the most effective.

How to unclog a sink: Tips on how to unblock a bathroom sink