Everyone has had to deal with a blocked shower drain full of hair. It is a nasty job to remove hair from the shower drain time and again. It stinks and it is slimy. HG has 5 tips for unblocking your drains effectively and for making and keeping your bathroom drain free from hair. You can shower hygienically and without cares.

The cause of a blocked shower drain

A blocked shower drain also reduces the lifespan of the pipes. Fortunately, a blockage is easy to prevent and with the right products you can always take a shower without blockages.

Unclog the shower drain yourself

Unblock the shower drain with products you already have at home. We have collected a number of DIY tips you can try. You remove hair from your drains easily and without mess with our HG drain and plug hair unblocker.

1. Unblock the shower drain with your hands

Open the shower drain and remove the hair from the drain with your fingers. If the blockage is deeper down? Solve the problem by using metal wire:

Keep an old towel, bucket or wastepaper bin handy so you can get rid of the mess from the drain. Do not rinse this down the drain, but throw it in the bin. Then wash your hands.

2. Unblock the shower drain with a plunger

With a plunger you put pressure on a blockage. It comes loose and disappears down the drain. Put the suction cap of the plunger over the shower drain and produce an up and down movement with the handle. The water starts to drain away again.

Only use the plunger when your shower drain has a minor blockage. A serious blockage can become stuck again deeper down the drain after using a plunger. This produces major complications.

3. Unblock with a drain cleaning coil

For this method it is also recommended to have an old towel at hand. It means you can capture the dirt from the drains immediately.

4. Unblock a shower drain with a mixture of baking soda, cleaning vinegar and hot water

Unblock your blocked shower drain with a home-made unblocker. This product dissolves shampoo residues and hair, which means the water can drain away again. This is how you make the unblocker:

With this product you unblock a minor blockage in a shower drain or unblock a bathroom sink. If the water still doesn't drain after using this mixture? Dissolve it with a powerful unblocker, such as HG drain and plug hair unblocker. 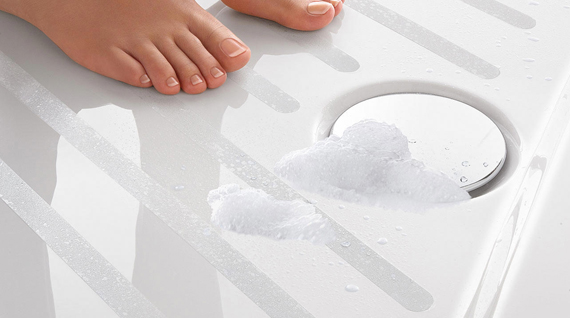 The above tips are convenient if you're looking for a quick DIY solution for your blocked shower drain. Yet the chance of success is not guaranteed and these unblocking methods cause mess and dirt in your bathroom.

The simplest way of unblocking your shower is to use a high-quality liquid unblocker, such as HG drain and plug hair unblocker. The unblocker is ready to use and the special formula dissolves soap residues and hair quickly. You can shower again without a blockage within an hour.

3 ways of preventing hair in a shower drain

Youcannot avoid hair and soap residues in your shower drain. Fortunately, there are a number of ways to prevent a blocked drain. For example:

What causes a blocked shower drain?

A blocked shower drain is caused by hair and soap scum that accumulate in your drains.

How do I unclog my blocked shower drain?

You can unblock your shower drain in 5 ways:

Which HG product do I use to unclog my shower drain?

How do I prevent a blocked shower drain?

You can prevent a blocked shower drain by:

How to unblock a sink

Blocked sink: Learn how to unblock a kitchen sink