Do you have a product with a different label? That is possible, because we changed all our labels!

All our products still have the same tried and trusted effect. The directions have not changed either. Click on the magnifying glass for the old packaging. If you would like to know more? Click here. 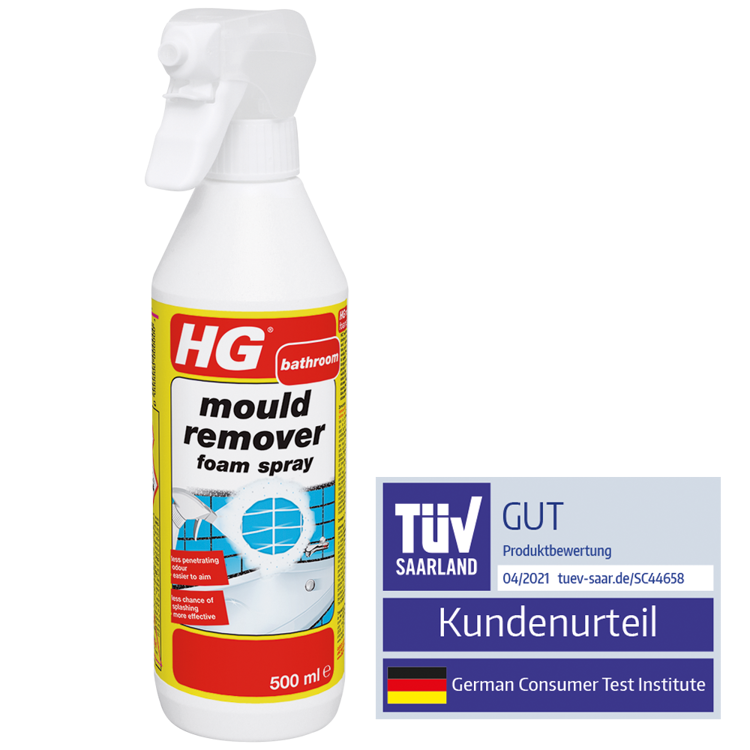 Where to buy? Buy online

Our mould remover spray works in an instant. You can eliminate mould and odour in damp areas both indoors and outdoors, easily and effectively. The foam is formulated to remain on the surface for longer, meaning any mould and damp stay away for longer too.

Mould often appears in poorly ventilated rooms with lots of moisture, like the bathroom or kitchen. The silicon seal on baths, showers, as well as bathroom tiling or plaster, are often covered with black mould, which can be difficult to remove. HG mould remover foam spray has a mild fragrance. It is also easy to spray accurately, so you can use this bathroom mould remover without splashing onto other areas. You can also see HG mould spray. Its unique foam formula makes for optimum bonding, is self-acting and means you’ll see positive results within 30 minutes.

How to use HG black mould remover spray

This mould and mildew remover spray is simple and easy to use. Follow the steps below for your mould-free bathroom.

Use biocides safely. Always read the label and product information before use.

Can I use the mould removers on a ceiling?
We do not recommend this, as the bonding of plaster and paint on ceilings is less strong than on walls. It does not adhere as well. Our mould removers could reduce the bonding to the ceilings. Therefore, we do not recommend using these products on a ceiling. You can try it at your own risk, but be sure to test it in a small area first.

Thank you for your question. We will respond as soon as possible.

View reviews
Based on 25 reviews

View reviews
Based on 21759 reviews

View reviews
Based on 7 reviews

View reviews
Based on 35 reviews

How to get rid of mould on walls

How to get rid of black mould